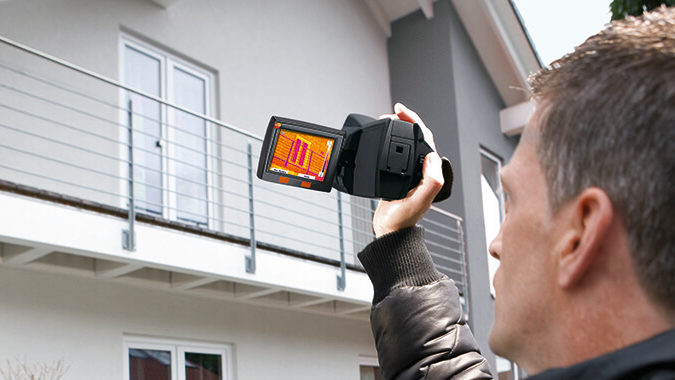 Non-contact surface temperature measurement has been possible since about 1960, but expensive sensors and evaluation devices have been an obstacle to its widespread use in industry and shops. Thanks to new production technologies and falling component prices, this technology succeeded in the 1990s. This is evidenced, for example, by the multiple use of infrared switches in the field of electrical installations. Today, therefore, small, affordable, hand-held thermometers for non-contact measurement are possible, which cost no more than sensors in comparable instruments in the 1970s.

Non-contact thermometers are used mainly where other measurement methods (eg contact thermometers) cannot be used or only to a limited extent. These can be live parts, rough surfaces, low thermal conductivity objects and rotating machine parts or packaged food that could damage the packaging if the probe is inserted.

What are atmospheric windows and why are measurements made in these areas? In the area of ​​so-called atmospheric windows, there is very little absorption or emission of (electromagnetic) radiation caused by air components between the measured object and the measuring device. Therefore, especially at distances to the measured object of less than 1 m, there are no influences caused by components that usually occur in the air. Measurement of low and negative temperatures is only possible in the range from 8 to 14 µm, because a wide energy band is required for evaluation to create a usable signal.

It is known from everyday life that all bodies emit electromagnetic waves, called radiation, depending on their temperature. Electromagnetic radiation is always governed by the same basic laws of nature but is perceived differently by man.

Perceptions are light or heat. Other areas, such as X-rays, are not perceived at all or through their action (ultraviolet radiation leads to sunburn). The electromagnetic wave spectrum of radiation has a range of about 1023. Generally speaking, only the visible part of electromagnetic radiation (VIS = visible) is referred to as light. This part occupies the wavelength range from 380 nm (purple) to 750 nm (red). The boundaries of this area are defined by the sensitivity of the human eye. Ultraviolet (UV) radiation is attached in the shortwave region.

In the long-wavelength region, infrared radiation (NIR) almost borders on visible light. It ranges from 750 nm to 2.5 µm. Next is the mid-infrared spectral range (MIR or IR only). It covers an area from 2.5 µm to 25 µm. The far infrared (FIR) region includes a wavelength range of 25 µm to about 3 mm.

During the propagation of radiation, energy is transferred, which allows, with the help of detection of this radiation, to measure the non-contact temperature of the body. The radiated energy and its characteristic wavelength depend primarily on the temperature of the radiating body. Ideally, the measured object receives all the infrared radiation from the environment and at the same time emits the maximum radiation corresponding to its temperature. In this case, there is talk of a so-called “black body”. In nature, such behavior is almost non-existent, there is also a partial reflection of radiation. Therefore, in order to achieve reliable measurement results in practice, it is necessary to precisely define this radiation, energy reflection or eliminate this effect by appropriate measures. This can be done by means of a reference measurement with a contact thermometer or by deliberately changing the measured area so that this area is easily measurable for infrared measuring technology; you can use paint, glue, plastic coating or paper stickers. The measured object and its environment will ultimately decide whether and what measures to follow. Assessment assistance is offered by classifying application examples according to the appearance of the measured objects and their surface.

An object that absorbs all the energy from the incident infrared radiation converts it into its own infrared radiation and radiates 100% of this energy again. There is no reflection or transmission of radiation. In practice, objects with these properties do not occur.

The measured object is primarily in the foreground of each application. The task is to measure the temperature accurately and precisely. Solids, liquids or gases, each measured object appears to the infrared sensor individually and specifically. This is based on the specific properties of the material and the surface. Many organic products and liquids can thus be measured without special measures. In contrast, metals, especially those with a shiny surface, require special consideration.

If the degree of reflection and the degree of transmission are equal to 0, then we have an ideal measured body, the so-called “black emitter”, whose radiated energy can be calculated using Planek’s law of radiation. Such an ideal body has an emissivity e = 1.

It absorbs and emits 100 % of radiation. Emissivity degree e = 1. In fact, such ideal conditions do not occur. Transmission and reflection always accompany measurements as interfering quantities.

Most bodies found in nature are referred to as “gray emitters”. They have the same characteristics as black emitters. Only the intensity of the radiation is lower. This is corrected by setting the emissivity level.

Color emitters are materials for which the degree of emissivity depends on the wavelength and thus on the temperature. This means that such a body has, for example, at + 200 ° C a different emissivity than at +600 ° C.

This is true for most metal materials. It should be noted here that the emissivity degree e is determined at the measured temperature.